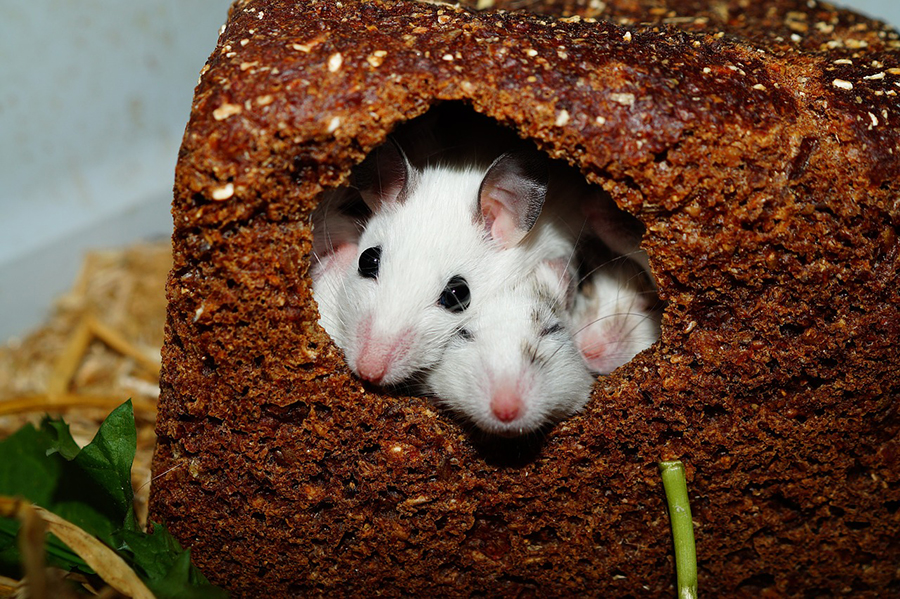 Mice belong to rodents which affect not only to our economic but also our health. Their reproductive speed is very quickly. They pass a complex mating process. Pheromones are used to communicate between males and females during mating process.

The females emit pheromones to attract the males. After catching hormone of female, the males emit mating signal by the sonar. Mating signal are very diverse among each individual with special sound. The females also emit the sonar although it is not related to mating. We can recognize mice by this sonar.

No matter season or climate is, mice reproduce continually. Mice start reproduce after 50 days in both males and females although the female can breed from 25 to 40 days. Some specimens are capable of breeding at six weeks. Mice tend to live for approximately a year. Mice have many reproductive periods and occur throughout the year. Ovulation is spontaneous. During the estrous about 4 – 5 days and breed themselves in 12 hours at the midnight, vaginal spots are very useful in mating to determine the period of reproductive cycle. Mating commonly happens in the evening and it can be confirmed by the appearance of dutch cap in 24 hours after matting. The presence of sperms on vaginal spots is one of reliable evidences of mating.

The female living together commonly start periods of reproduction and are not in cycles. If they exposed males or pheromone’s males, most of them will start reproduction in 72 hours. The process of synchronizing the reproductive period is called Whitten effect. The contact between mice and pheromones of the strange males can lead to pseudocyesis and the pheromones are known as Bruce effect.

The average pregnancy period is about 20 days. Mice are capable of breeding in 14 – 24 hours after birth and the pregnancy lasts 3 – 10 days because of late fertilization. The females can produce 5 – 8 pups after mating. Although the female usually protects her babies, she also eats them when having starvation.

The average size of each litter is 10 – 12 pups as long as breeding process is optimal. As a rule, pure mice have longer pregnancy and less litter than crossbred mice. The young are about 0.5 – 1.5 kg in weight, have no hair, closed eyes and ears. The cannibalism is not popular in this specimen but the females should not be disturbed during breeding at least two days after birth. The pups weaned at 3 weeks of age and their weight are about 10 – 12 grams.